I Renovated My Home Office… Well, My Blogging Room 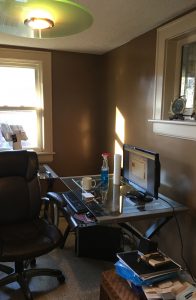 Being a blogger, more specifically a full time blogger like me, where I work (ok, blog) is just as important as if I were going to the office. I mean let’s face it, it’s difficult to concentrate buried under a mound of clutter, particularly when that clutter is in a dark dungeon. Maybe I’m exaggerating, but that’s how I felt about my home office before the renovation. Go ahead, take a look at the picture, it’s real!

It was dark (my husband chose the paint color years ago), it had Berber carpet (he chose that too) which I actually hate more than the color of the paint if that’s even possible , and it was C L U T T E R E D!

Unfortunately, I took this picture after removing much of the clutter, but you can still get a good idea of the poor conditions I was working in!

The first step was choosing a paint color, but good Lord how could I choose a modern paint color with that horrific carpet that he forced me to have installed a century ago – it was so ugly! I complained about it for a couple of days, and then…

To my surprise, he said, and I quote:

Babe, just go pick out some new carpet and we’ll have it installed.

I was over-the-moon, but there was one little problem; I didn’t want new carpet. I wanted a new floor! He loves me, he loves me not. Well, he loves me because he agreed that we could get the bamboo flooring that I had already been researching (shhh, don’t tell). He has a friend who lays flooring for a living, so the biggest expense was the flooring itself.

I chose a gray bamboo floor, and before he could change his mind, I went and purchased as many bundles as I needed to cover the area. I checked with our floor guy first to make sure that I had measured and calculated properly, and would you believe that I did it right? Maybe I should become a floor guy. Nah, I’ll stick to blogging.

Finally, I Could Pick Out My Paint Color

I went to Home Depot and chose several swatches (do they still call them that?) so that I could bring them home and get everyone’s opinion. I was going to try and keep this decision from my husband, I mean after all, look what I ended up with last time he tried to help me redecorate. To my surprise, he and my daughter both loved the color I chose, so there, everyone’s happy (my 20 year old son could really care less).

I chose a light gray (I think it was called metal white or something like that), and I had this vision of orange statement pieces to add some color, I just had no idea what that looked like yet.

What you can’t see in the photo above are the sitting chairs that I had. Granted they were modern, and very cute, they were too dark for the room. Maybe had the walls been a very light taupe I could have kept them, but really it was just a good excuse to get new ones!

I also had too much furniture which did not help with the cluttered look. My glass desk had an attached piece that made it like an L shape, which was practical, just not for my small space. I decided to remove the attached piece of my desk and also the glass bookshelf (it’s sole purpose was collecting dust and “stuff” that couldn’t find a home).

I was officially on my way to a brighter workspace, and new furniture as an added bonus (my husband just didn’t know about that part yet).

I decided on these cute orange sitting chairs, and I found them online here. They’re not IKEA, but hey, I’m on a bloggers budget.

Hold On, the Desk That I Removed Was Home to the Monitor for Our Security Cameras, Now What?

So, the desk was too large for the room, after all, the whole idea of the remodel was to have a cleaner, more updated workspace. Now I have nowhere to put the TV monitor. I didn’t want to move it to another room due to the fact that I am home alone all day, and believe it or not, us bloggers do spend A LOT of time at our computers. I rely on the TV monitor when someone knocks on the door, or just in general so I know what is going on outside of my little world.

Problem solved… I found a cute console table that would look perfect in my new office, and that is where I put the TV monitor. I also bought some cute boxes, paper trays and binders from The Container Store so I could hide all my junk, and I put those on the bottom shelf of my new table!

Believe it or not, I was pretty happy with the light that I had in my office, but my husband insisted we go shopping for a new one. Wait, did I just say that I was happy with something old staying in my brand new bloggers cave? You’re right, I must have been feeling guilty about the new floor.

We shopped and shopped for a new ceiling light, and when I found the one I wanted, it was one of those times where you just knew. You knew that there would not be another light on the face of this earth that would look better hanging from the ceiling right above my head. I mean after all, how often am I looking up while writing all of these blog posts unless I am having a meltdown about what to write about next? I think I just found my new blog post. Yeah, I’ll write about the daily meltdowns I have trying to please all of my readers so they don’t go running for the hills.

I Was Finished, Or Was I?

Once the walls were painted, the floor was laid (I even got new trim (I think it’s called trim?) on the baseboards), the light was hung (hung, hanged, who cares?), the chairs and console table were assembled, the junk was stuffed in the new light gray boxes, but something was missing.

I’m a blogger, so I have to have a white faux fur rug, right?

Isn’t that a requirement for posting pictures on social media? I’m sure it is, but all I know is that I wanted one. I couldn’t stop there because then I thought how cute it would look if I bought a faux fur table runner for the top of my desk so my computer monitor has a soft cozy resting place.

I had two problems remaining:

The first one, which is a HUGE problem when you’re a blogger, was the amount of cords. I have so many cords that my blogger’s den is a fire hazard. From the Blue Yeti microphone cords (you know, for all of those Podcasts I do – yawn) to the speakers, mouse (yes, I still had a cord attached to my mouse), monitor, cable box, oh my lord I am getting stressed out just thinking about it.

So, I went in search for a computer cable organizer. Something that would hide my cords so that it didn’t look like Spiderman was crawling down my wall.  I ended up going with a box that hides the computer cords, and it actually looks pretty neat. I got it on Amazon, and it was totally worth every penny. I then decided to go into Best Buy and take a look around, and I came out with a cordless mouse and a cordless computer monitor. I’m finally on my way of untangling my life!

The second problem (which is still a problem) is my printer. It is the elephant in the room, literally. You know I had to have the one that copies, scans, faxes (I don’t even have a phone line), prints pictures (I wonder if that even works?), and of course do my laundry. It lost it’s home too when the camera monitor was left homeless. Unfortunately for the printer, no one would take it in, so it is still sitting on my office floor.

If you had any idea how much work was put into this post, you would likely be asking yourself why on earth I wasted my time. I mean, I had to dust my office, windex my desk, swiffer my floor, de-clutter my desk, remove my dog from the room (along with his bed and blankets), and I had to get my iPhone out and take a few pictures. I even lit my mahogany teakwood candle. My readers may not be able to smell it, but it makes my office complete!

Are You Ready To See My New Blog Space?

Where On Earth is the Faux Fur Rug?

But the Faux Fur rug is not in the photo Melissa, why? Well, I had to remove it so that it could be cleaned. It has become my dog’s favorite place to lay (yes, even before his own bed), and it was starting to look dingy. So here is a recent photo (that’s my Dad) where the rug can partially be seen under the 60 pound boxer. 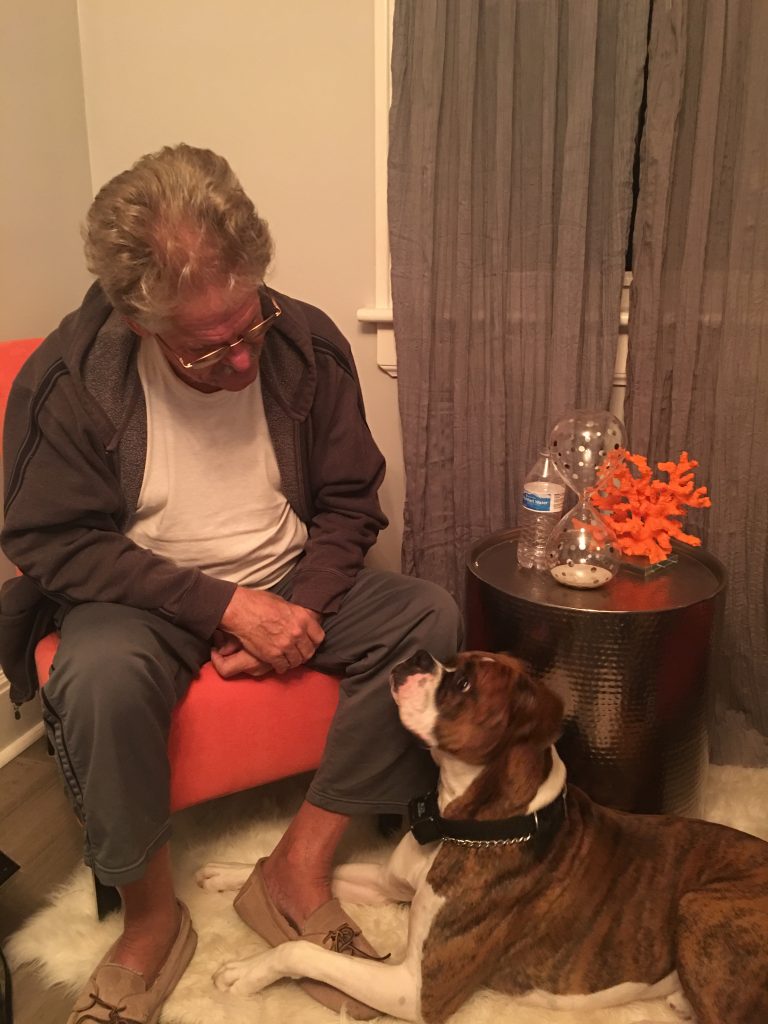 Luxury Gifts For Men Who Have Everything