This Week's Top Posts
Choosing the Right Bare Minerals Mineral Veil Finishing...
Luxury Gifts For Men Who Have Everything
Bare Minerals Matte Foundation vs. Original
My Most Popular Blog Post of All Time
My Bare Minerals Starter Kit Review
How to Use the Bare Minerals Starter Kit
Lancôme Génifique Yeux Light-Pearl
Dollar Car Rental is Scamming Me For a...
Meaningful Beauty Ultra Lifting and Filling Treatment Review
The Trip that Forced Me to Focus On...
FamilyGIFT IDEASGifts For Pool LoversHomeLifestyle

All About the Floating Bluetooth Speaker

In April, 2017, I gave my dad a floating bluetooth speaker for his birthday. He loved music like most love television. I can remember when I was younger, he always had the stereo on during the day, and I followed in his footsteps. I would much prefer to listen to music than watch TV, especially if I’m outside, but even more so if I’m in a pool.

When I was 19, my Dad had a pool installed, and I thought it was the greatest thing in the world. We lived in Ohio, so the months were limited to how often we could enjoy it, but I can tell you one thing, there was always someone in that pool during the summertime, and there was always music playing.

Once Dad retired, he sold his home in Ohio, and moved to the home he bought in Florida which has a beautiful in ground pool. If you were to go visit him, I can guarantee you that he would be in or near the pool, and the music would be playing from the stereo system he set up outside at the pool.

In recent years, he finally upgraded from the old “flip phone” to a smartphone. He began to experiment with different apps for sports and such, but as far as music, he still relied on his subscription to SiriusXM. He had it in his car, and he had it for his home, specifically for the pool area.

I can remember a conversation with my Dad where he complained that if he wanted to change the station, he had to get out of the pool. I wasn’t sure what I could do about that, but kept it in the back of my mind.

The Best Birthday Gift Ever Had Been Discovered

One day, my daughter and I were at Sam’s Club, and it happened to be right after I received an email from the website that I had ordered Dad’s birthday gift from. He was a huge Pittsburgh Steelers fan, and I ordered him a neon light for the pool area. The email was notifying me that the product I ordered was out of stock, and they would be refunding my credit card.

Below is a screenshot of the email in case you were curious.

It was perfect timing really. My dad was one of the hardest people to buy for. He always went out and got something if he wanted it, so finding something that he wanted or needed was difficult.

This is why it was perfect that I found something that he needed and would want, he just didn’t know it yet.

As soon as my daughter and I saw the display of speakers, we both spoke at the same time.

This would be perfect for Grandpa!

So of course, we bought it without hesitation.

I have not seen it again at Sam’s Club, but you can get it on Amazon here, and it is very reasonably priced. The perfect gift for the hard to buy for pool lovers in your life!

Dad came up to Ohio for a visit, so my daughter got the speaker set up for him to use from his phone. She installed Pandora, and he was in heaven.

He sat outside and played music from his Bluetooth speaker, and I knew right then that it may have just been the best gift I had ever given him. This may be one of the most unique gifts for men who have everything because it is not something that they would likely go out and purchase on their own.

It’s all he talked about, even after he returned home to Florida.

Dad In the Pool With His Floating Bluetooth Speaker

A week or so later, I received a text from Dad with this photo attached! He’s showing off his floating bluetooth speaker in action! I love this photo of my Dad. He worked hard all of his life to finally be able to retire to sunny Florida, even if it was only for 9 years. 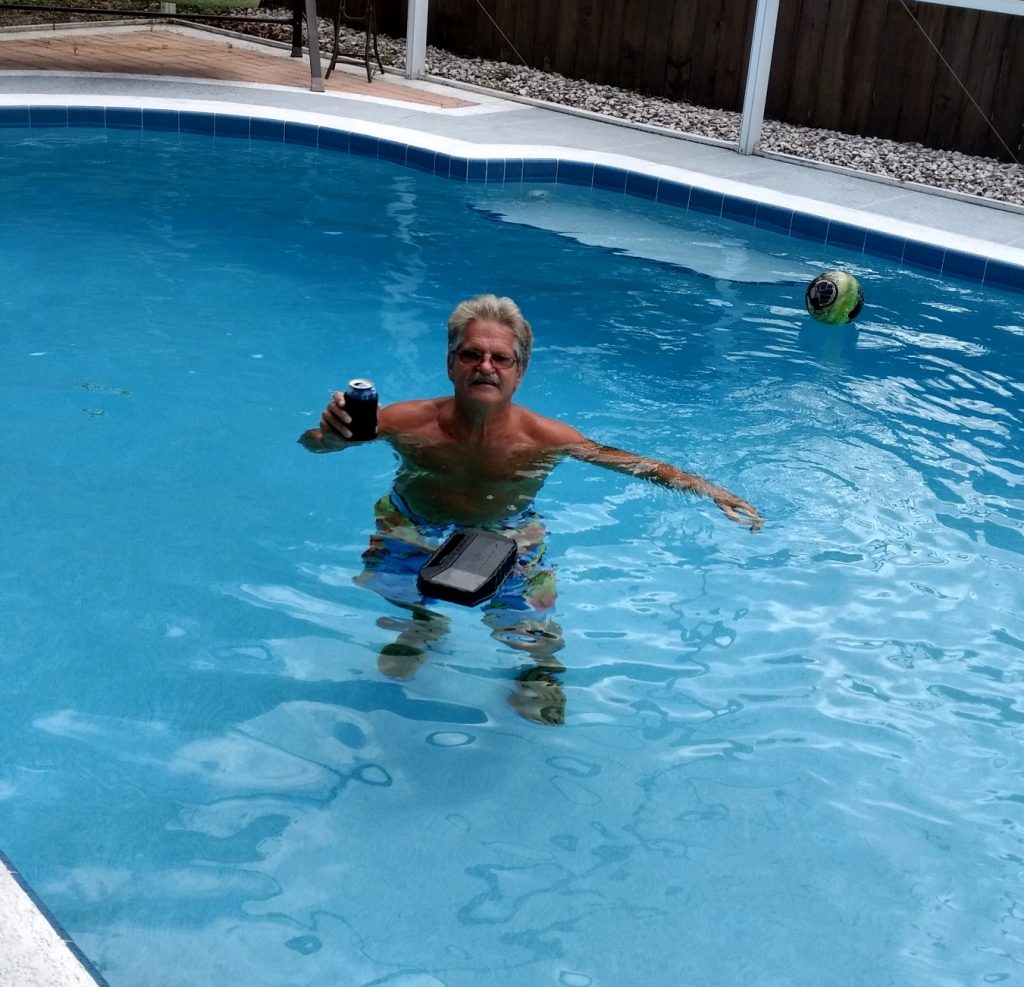 I called him, and he raved about how he could change the station on his phone app right from the bluetooth speaker, all while floating in the pool!

When he came home in October (his final visit), he brought the speaker with him, and I have had it ever since.

I miss you Dad, but I am using your Bluetooth speaker at this very moment, and I wish you were here to listen to Thunder Road with me!

Melissa is an entrepreneur, mother and wife. She is the founder and content editor of Be Electrifying and a freelance digital marketer. Melissa loves talking about beauty, fitness (although not a self-proclaimed guru), family, shopping and any other topic that might pop up while she's writing. In her spare time, she enjoys spending time with her family and friends, reading books and cooking.

Mirror Review: Will it be the Key to...

Dad Is Finally at Rest… and You’ll Never...

Things I’ve Learned In My 45 Years

We are an affiliate of some of the health and beauty companies we recommend. If you decide to purchase any of the products through our links, because of our recommendation, be it expressed or implied, we may receive a commission. Thanks for visiting our site!

This website uses cookies to improve your experience. We assume by now you're ok with this, but you can opt-out if you wish. Accept Read More