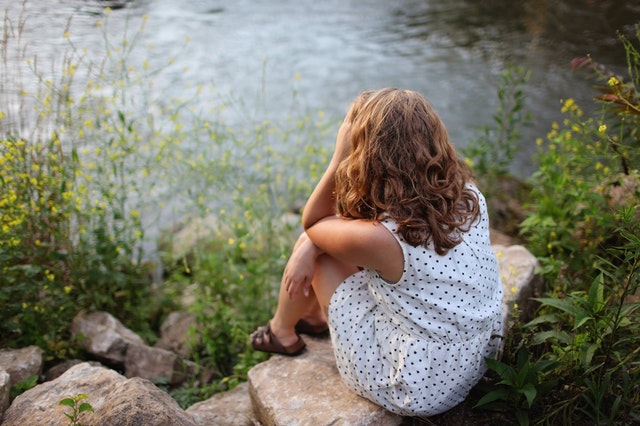 I have never shared my anxiety story before, and I decided that it was time to share my health anxiety with my readers.

When It All Started

I broke my foot (first broken bone in my life), and it was just after Thanksgiving. Terrible timing right?

I am not the right person to have a broken foot. I am not joking when I say that asking someone for help is the absolute last thing I want to do (hmmm… and I have anxiety?). My children were waiting on me, my husband was waiting on me. Many moms may have enjoyed all the attention, and maybe for a day it was nice, it allowed me more time for self-pity, but when I was over it, I was really over it.

At any rate, the holidays were sneaking up on me, so I put a boot on and did what I had to do. I was pretty sure that this was the one thing I could not delegate.

Eventually, I was back on both feet again and back to normal.

It was late afternoon, I was getting ready to go the grocery store (literally walking to my car), and I felt this immediate abdominal pain. I suffer from ovary pains at times, but this was that times 100. It was so unbearable that I literally did not think I could make it back into the house. The only person home was my son, who was 18 at the time.

The pain was so bad that I told him to take me to the emergency room. Now, most of my readers do not know me on a personal level, but for me to go to the ER, it must mean that I am having a baby!

We got to the car, and by this point, my hands were beginning to curl up. I can’t really explain it any better than that. My fingers kept trying to close, and the only way I could keep my hands open was to hold my fingers. We are en-route to the ER, and I could hardly speak, and I would have swore my jaw was sagging. I honestly thought I was having a stroke, and I am not trying to make this sound any worse than what it really was. The closest ER is only about 2 miles away, and when we arrived, we realized that it is no longer an ER. They converted the entire facility into a rehab facility! Now, we are 10-15 minutes away from an emergency room, which at the time seemed like eternity!

I was so terrified that I told him to call 911, and have them meet us back at the house. He did, and they were pulling up just as we headed back down our street.

They put me in the ambulance and checked my vitals. Of course asked me if I was a drug user, sigh… I know they were just doing their jobs! As it turns out, I was hyperventilating due to the severe pain that I was in (which had begun to subside by this point and I hadn’t even realized it because I was so frantic). I was advised to make an appointment with my doctor to figure out the source of my abdominal pain.

Without going into a long story on that, it turns out that I had a ruptured cyst!

This was not the only time this happened, and it took 3-4 times before I learned to control my breathing so that I did not hyperventilate.

Son… MOM! I think my jaw is broken.

Me… What do you mean you think your jaw is broken?

Son… My face is swelling and I can’t move my jaw.

Me… Where are you?

Son… I have to take Brock home first

Me… Absolutely not! I will have Aunt Jackie come pick him up. Are you ok to drive? Do you want me to come get you?

Son… No, I’ll be home in a few minutes

Me… Ok, be careful but hurry up (wait, that doesn’t make sense!

So, here is the story:

Austin and Brock were playing basketball. I think they called it 1 on 1, where Austin was playing on one court with another boy, and Brock was on another.

The boy Austin was playing against got angry because Austin blocked him. When Austin turned with the ball, the kid sucker punched him from the side. He didn’t even know what hit him.

Off to the ER

I took him to the emergency room, and they did an x-ray of his jaw. It was definitely broken, but there was nothing the hospital could do. He had to see a plastic surgeon!

It took two days to get in touch with the surgeon that we were referred to by the hospital. I looked him up, and found that he was one of the best in the area. By the time I spoke with someone from his office, it was nearing 3pm on a Friday, and the lady I spoke to said she could get him in by the end of next week!

I was in shock. I begged her to get him in sooner. I explained that he cannot even move his jaw! She was very friendly and told me that she would call me back.

Within 15 minutes, she called me back. She said that she spoke with the surgeon, and he asked if we could be there at 5:30 pm that day! She said that his last appointment is at 4:45pm, but that he said he would stay in order to see my son. I was so ecstatic.

Off to The Plastic Surgeon’s

We met with the doctor. He reviewed Austin’s x-rays and did his own evaluation. He then broke the news that Austin would need jaw surgery, and that his mouth would be wired shut for at least 4 weeks!

I was in total denial. I was so angry that all I wanted to do was contact the kid’s mother who punched my son and ask what kind of an animal she is raising. Here I am with my son who cannot eat, and will now be sipping from a straw for 4 weeks while her son is probably home playing video games and eating pizza!

There was no way out. Surgery was the only option.

This may have been the most terrifying day of my life. My son has never been keen on IV’s. In fact, he panics so it is always a problem for the nurse who is trying to give the IV.

He had also never had anesthesia. I was so terrified of him being allergic to it that I literally had to remove myself from the room. My husband stayed in with him while I tried to get my shit together.

The surgery went well (it was outpatient), and now we are home. They gave us a pair of sterile scissors in the event that we had an emergency and the emergency personnel had to cut the wires. Austin’s state of mind was very scary, so I hid the scissors from him.

He felt so sick to his stomach from the anesthesia and pain pills that he felt like he was going to get sick. He was so worried about choking on his own vomit because he could not open his mouth AT ALL!

There was literally enough room to fit a straw… NOTHING ELSE!

He ended up needing the wires in his mouth for 6 weeks. Prior to the broken jaw, he was a healthy and fit 18 year old. He worked out at the gym, played basketball almost every day, and had a very nice build at 5′ 10″ tall. He weighed a fit 183 before surgery. At the end of this horrific time in his life, he came out of it weighing only 161 pounds. It took nearly a year for him to get back to his original weight.

He still has a numb spot on his chin, and the doctor says that it may be there forever due to a damaged nerve.

We’re not done yet. It is now March 2016 (literally about a week after Austin had his jaw surgery

I was in the middle of making a smoothie for Austin when my phone rang. It was my 15 year old daughter, Brooke.

She was calling me from inside of an ambulance! She was in a car accident, and the car was totaled. Her friend slid on a patch of ice and the car completely rolled over. All of the windows were busted out, but she was so calm when she spoke to me!

I went into panic mode! I have to feed Austin but I have to get down to Children’s Hospital NOW.

Luckily, she came out of it with minor injuries. The doctor told her that she must have had an angel on her shoulder.

How Did I Not Have a Breakdown?

I know you won’t believe me, but there is more. I will save it for another post. Subscribe to keep updated on my trials and tribulations of life!